The government has set up a £63m grant scheme to help homeless households in England into accommodation.

The prime minister has also restated his commitment to end rough sleeping by 2024 and an extra £3m to aid rough sleepers during the cold winter months.

But Labour’s John Healey said it was “too little, too late for the thousands of people sleeping on our streets this Christmas”.

He said rough sleeping had doubled since the Tories have been in power.

The £3m – which will be immediately available for this winter – is in addition to a £10m Cold Winter Fund announced by the government in September, to help local councils provide accommodation for rough sleepers.

Downing Street said £63m of new money has been made available under a grant scheme which seeks to help homeless households into accommodation.

It added a further £200m already committed to councils in England has been reallocated as part of efforts to help people who are either homeless or at risk of losing their properties.

Visiting The Marylebone Project, a hostel for homeless women in west London, Mr Johnson said: “It cannot be right in the 21st century that people are homeless or having to sleep on our streets, and this government will work tirelessly to bring this to an end.”

But Labour’s shadow housing secretary John Healey said: “Rough sleeping has more than doubled since 2010 as a direct result of decisions made by Conservative ministers, including cuts of £1bn a year from vital homelessness services.

“Homelessness always rises under the Tories. It will take a Labour government to end rough sleeping for good.”

At the last count there were 4,677 people identified as sleeping rough in England – more than double the number in 2010 – although this is thought to be an underestimate.

When the latest government homelessness figures were published last week, for April to June 2019, 68,170 households were recorded as having been assessed by their councils as either homeless or threatened with homelessness.

This was an increase of more than 11% compared with the same period last year. 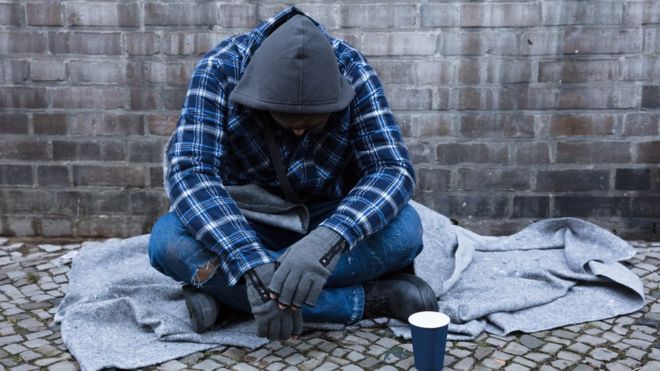 People estimated or counted on the streets on a single night

But in figures also published last week, homeless Shelter put the total number of homeless people far higher, at 280,000, by looking at a range of official council figures combined with social services records.

The London borough of Newham had the most homeless people, a total of 14,435, according to the Shelter estimates.

The highest number of rough sleepers was in Westminster, with 306 estimated to have no roof over their heads on any given night.

Shelter chief executive Polly Neate said: “Homelessness blights lives and leaves a lasting imprint of trauma, and yet 280,000 people in England are without a home this Christmas. And many are only days away from joining them.

“As well as those facing serious ill-health or even death sleeping rough on our streets this winter, there are thousands of families trapped in grotty emergency B&Bs, with no space for children to sit and eat, let alone play.

“This is the grim truth our new government must confront and do something radical to change.”